What or which memory card should I buy? 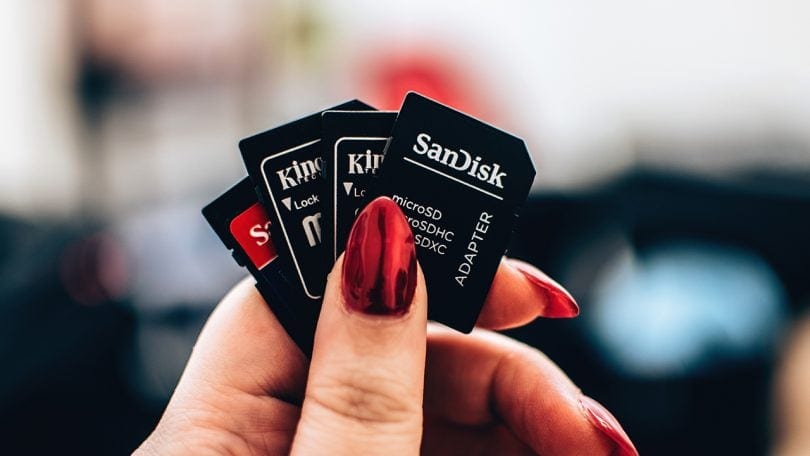 How many times haven’t you been standing there in the store in front of a big wall with endless choices of memory cards? In advance you have found out what model you should have for your camera, but then what? Size, type, speed, color, price, brand…..HELP!

I myself is usually described as the big nerd among my friends when it comes to technique. But the questions above was far beyond my knowledge. I don’t know how many times I’ve been standing there, feeling like a fool, not understanding s**t. Even less now when my camera handles both SD-cards and Compact Flash. Which card should I choose, and why? In almost any case it’s ended up with no card at all with a feeling that I most certain already have the cards I need. Then I leave the store, without any new cards, and instead a bad movie with Richard Chamberlain that was on sale beside the exit.

To solve my problem, both with too few cards and a growing library with really bad movies I had to get some more information. A quick search on the web shows an enormous amount of technical articles describing different types of cards, speeds and brands. Sadly enough written by people studying nuclear physics or different physical theories all their life, hence completely non understandable. What to do?

I contacted both Nikon and Canon letting them explain what I needed and why, without being unnecessary technical. I also gave some card manufacturers a call.

Keep in mind that I’m writing about differences between functions for me as a photographer out in the field. I’ve not considered use on the computer. Yet.

Size on the card

For me personally I think big cards with much memory only is really stupid. What if your card brakes, or you lose it somewhere, or even worse; you loose the whole camera. The bigger the card the more you loose. I only use smaller cards (8gb-16Gb) and change often. Just like in the old days with film. If something happens to a card, I still have some pictures in my pocket. Of course you can use one slot as backup if you have more than one. Still, if you loose the whole camera, you also loose all your images on that card. 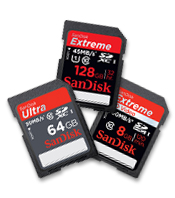 SD-cards have some definitions good to know about. Definitions such as SDHC or SDXC have nothing to do with speed. Only how many gigs they can store. SD up to 4Gb, SDHC 4-32Gb and SDXC 32Gb and up. Older cameras can’t handle the new ones.

CF-cards comes in two types. Type I and Type II. Cameras only use Type I. Not to be confused with SandDisk’s definitions I/II/III. The have nothing to do with card Types. It’s only their way to name the cards. The speed on these cards are often in mb/s or UDMA-definition. To make this more easy, look at my chart.

Speed often defines in “something” times “something” i.e. 133x or 600x. What this exactly means I will not go into without getting myself entangled in terms not of this world. Let’s just forget why and look at the chart below. In short 1x=0,15mb/s.

Then how much can your camera handle? To bad, all camera manufacturers keep this a secret. Both with the argument that there are so many factors that come into play.

When you use continuous shooting it’s the speed of the card, the write speed of the camera (the secret one) together with the cameras buffer that plays together. I tried three different cards on my Nikon D800, a 10mb/s, 30mb/s and a 60mb/s. If I hold and press the button for 30 seconds, to get the buffer working really hard, the amount of pictures after 30 seconds differed significantly with a faster card. From 21 to 53. A Nikon D800 handles full speed in 4 seconds before the buffer comes in to play.

The camera uses the buffer both for still shots and film, but play the biggest part in continuous shooting of still images. The camera always first saves the image or movie to the buffer and then to the card. It the card is too slow, you can and up in a situation where you can no longer shoot without the need to wait for the camera to save the images first to then clear the buffer. If you are filming the camera will stop filming completely and will not start again until the buffer is empty and you press the button again. If you shoot stills the speed will slow down significantly.

Filming with your DSLR 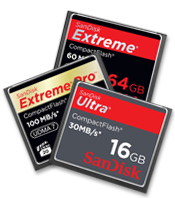 To explain the importance of speed further when you’re filming it’s important to know that the speed mentioned on the card isn’t the maximum continuous speed. It’s the highest speed for a short period of time. The maximum continues speed is measured in classes. A class 10 card can write 10mb/s continuously, a class 6 card 6mb/s, class 4 4mb/s and so on. Explained above your DSLR will stop filming if the write speed on your card is to slow. Here Canon and Nikon says differently. Nikon says you need at least a class 6 card, Canon says class 8. Why this? No one knows, maybe it has something to do with buffer. Anyway, they both agree that no camera on the market today needs a class 10 card.

(If you wonder why your DSLR only can film continuously for 29,59 minutes, it’s only because it otherwise would be defined as a film camera, hence higher taxes, different rules on events and such and would make the life as a working still photographer quite difficult.)

The brand of the card

Keep it simple. Buy cards you can rely on. Don’t get cheap and buy no-name cards that will brake if you breathe on them. My personal choices are SanDisk, Lexar, and Kingston. (There may be more great choices, but these are the ones I own and like) 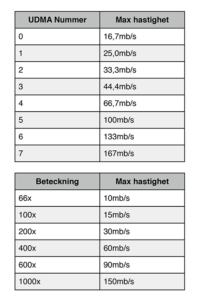 After careful consideration I can now see that it wasn’t as easy as I wanted it to be. At the same time it feels I’ve learned enough to get the courage to buy a card. The rule I now use is: If you have a high end camera (such as D800, D4, 5D MkIII, 1D MkIV i.e.) your camera will benefit up to 95mb/s or 600x. If you go higher, the difference will be minimal or non existing. If you have a camera in the middle section it’s good enough with a 60mb/s or 400x card. If you own a consumer model it’s even enough with 30mb/s or 200x.

Remember though that if you are going to shoot film, you need at least a class 6 or class 8 card depending on the brand of your camera.

If you find it hard to understand look at it this way; You don’t need a Ferrari if you only drive on small roads with a speed limit, and if you only go on the German Autobahn, a Trabant would be a really poor choice.

Help! What plugins to use in Photoshop?
Tips for great portraits