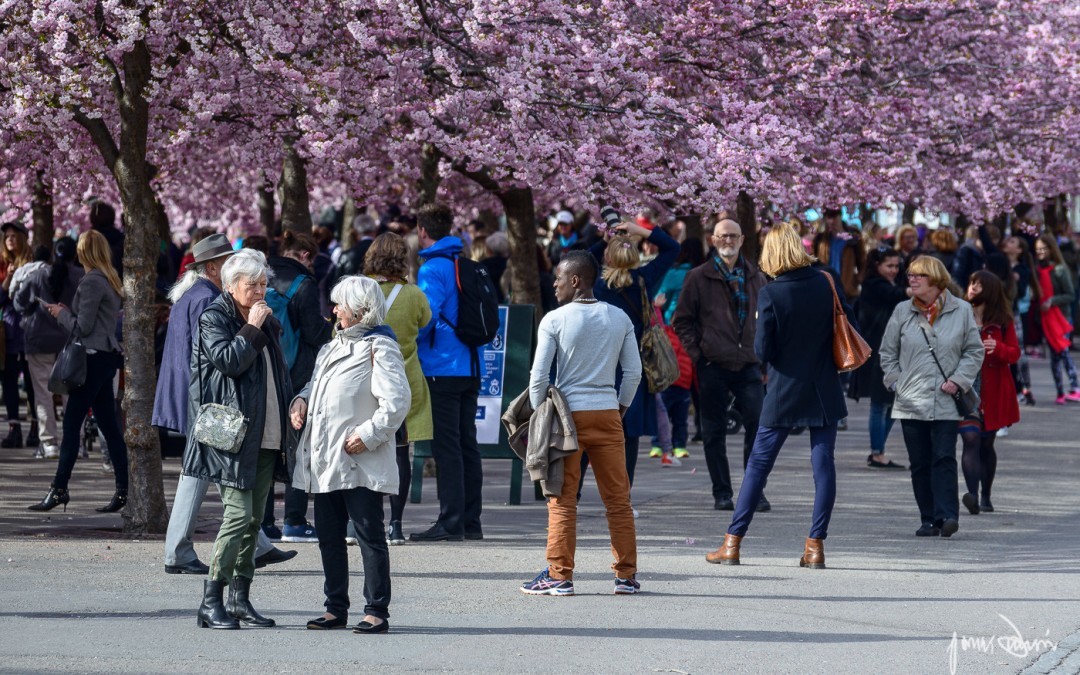 Every year in Stockholm, Sweden, something weird happens. Well, maybe not weird, but extraordinary. In mid-town there is a park called “Kungsträdgården” (Kings garden). At one end there are lots of cherry trees planted. Every year they bloom exactly for just one week. During this week the town’s photographers go bonkers. Not only the professional photographers, but everyone with a camera.

I have noticed this fact every single year, but I have actually never been there to take pictures. Just to have a beer or two. This year my mother nagged me about going there to take some lovely photos. Well, why not. Beautiful flowers are the best and easiest objects. A bit bored I packed my gear and set off towards the city center. I am the kind of person who loves a challenge. Taking pictures of beautiful flowers are not a challenge. Of course it is fun to have beautiful pictures of flowers for your computer background, but not for your portfolio. (Learn more about that here.)

Along the way to the city I sat on my scooter wondering about settings and composed shots of flowers in my head. I just have to do better than what I have seen people done before. But how? Cherry blossoms looks exactly the same all over the world. They are pink, pretty and there are always lots of them. Should I take my macro, or should I go wide? Or maybe use my tripod with a telephoto lens? With absolutely no idea what so ever I finally reached the park.

The sight was staggering. I had never seen anything like it. I just stood there gasping. Why haven’t I been here before during the blooming? It was just completely breathtaking. They were absolutely everywhere. Every kind and shape surrounding the whole area. I just stood there with a grin on my face, excited to just go bonkers with my camera. But where to start? They were so many.

Oh, one important thing though: I am not talking about the flowers, the heck with them. I am talking about the people taking pictures. They were everywhere. Taking selfies, macros, group shots, wide shots, some professional photographers taking fashion pictures of some models posing under the trees. I’ve never seen such diversity in my life. All genders, all ages. People with camera phones, compact digital cameras, big professional rigs, old film cameras and so on. I’ve been attending many different photo-walks during my years, but they were nothing compared to this.

After one and a half hour I went home with a big smile on my face. My memory card was filled to the brim with fun pictures. But not a single one of the cherry blossoms. Only the people. The people that make the city come to life.

When nature gets close
Newsletters & Subscription