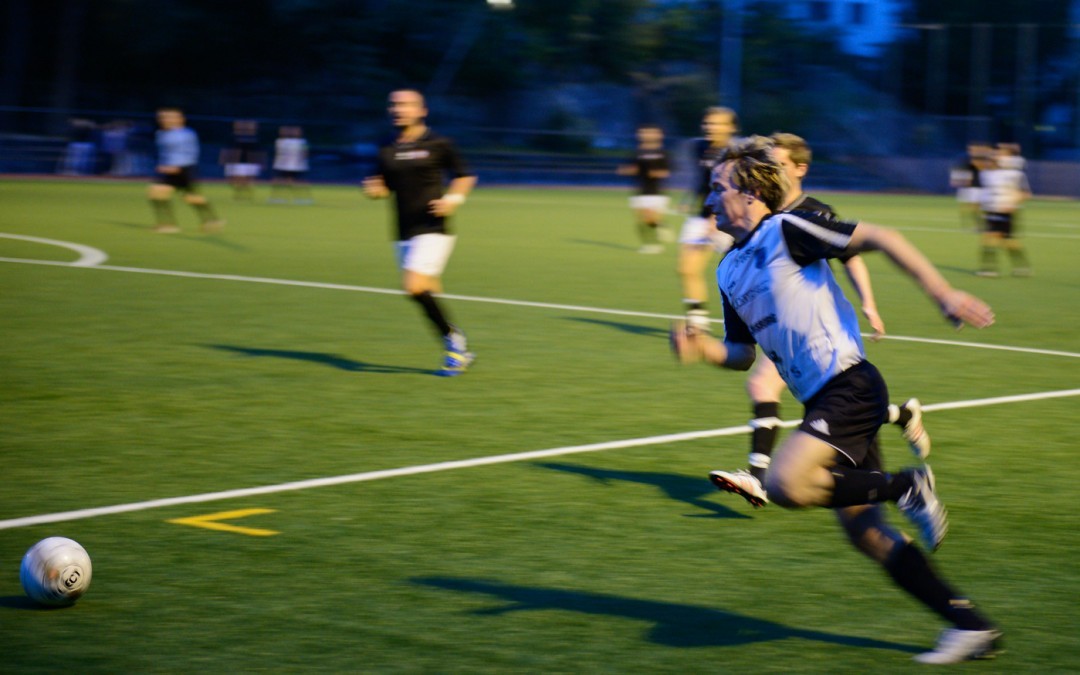 If you use a Nikon D800 you might think this is the worst idea ever. But hold on. There are quite a few downsides, on the other hand there are also positive sides.

Last Friday I was asked to document a football game. The ordinary photographer wasn’t around, but since I knew many of the players, they turned to me. It was the match between Stockholm Snipers vs. FC Sampierdarenese at Essinge IP in Stockholm. A match in the lower leagues, but quite good.

Since I mainly shoot commercial photography I don’t own a super-zoom lens. My camera is a Nikon D800. It is not in the fastest league, and Nikon cannot have developed it with ”Sports” in mind. However the picture quality is insanely good. Anyway, I accepted the assignment and got going.

I realized immediately that the white balance would be a big issue on the field. There were only four lights in the corners, not reaching very far and with a strange tint of color.  This would affect the quality of my shots. Second – as the game went on, the sun would set and gradually change the color temperature. It would cost me time in the after process, but shooting RAW was my only option on this field.

I shot only with aperture f2.8 to get the most light but still, I had to crank up the ISO to somewhere between 5000 to 6400. So, the lighting sucked, the high ISO would give my pictures lots and lots of noise. The RAW setting would limit my burst rate enormously and fill up my cards instantly.

Anxiety was tapping on my shoulders but I had to kick if offside. Letting worries take over was not an option. Just smile, keep your head up and do the job!

Ten minutes into the game I realized that my borrowed tele-zoom lens wasn’t doing it’s job at all. There was no single frame in focus. Hi there, panic! I only had one option to solve the problem. I exchanged the zoom to my trustworthy 24-70 f2.8. Normally that would not be the choice for a big football field, but the gigantic resolution of the camera saved me. The pictures were aimed for web publishing only and sharp and crisp enough to be cropped and considered “good enough”.

The lyrics of Barbara Streisand’s song “Being good Isn’t Good Enough” kept ringing in my head, “I’ll be the best or nothing at all.”

Face it. Sometimes you have to live with “Good enough”. It is not fun, particularly if you are a perfectionist, but it gets the job done. Be realistic. You cannot always match Zlatan Ibrahimovic, but you will be good enough in the field. You will find the best solution, there and then, and most important for your client – you will deliver!

Proving that YOU are certainly good enough! The rest is part of life and your inner learning process.

Men and their gear
Skansen Zoo